The Court of Appeal has upturned a judgment of a Federal High Court in Ogun State, which sentenced one Mr Akeem Jimoh to death for armed robbery. The appellate court set aside the judgement of the trial court on the ground that Jimoh was not giving fair hearing before the court reached its conclusion to convict and sentenced him for armed robbery. 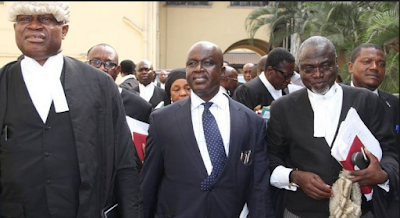 The court held that the state cannot be the prosecutor and at the same time be the defence in a criminal trial. Meanwhile, the Supreme Court, in appeal number SC/449/2014, has been asked to look into the matter with the ‎aim of deciding it one way or the other and if the apex court upturns the judgement of the appeal court, it then means that the Attorney-General, who is always the prosecutor in a criminal matter against the state can also represent an accused person in the same matter. The Appeal Court in its judgement in a case involving, Akeem Jimoh, accused of armed robbery said, Jimoh did not get fair trial since he was not allowed to get a counsel of his choice before being sentenced. ‎The court freed Jimoh, who was sentenced to death by a high court in Ogun State for armed robbery, but the appellate court, in ordering Jimoh’s release said he was not given fair trial at the High Court. According to the judgement of Justice Monica Dongban-Mensem‎, Jimoh had been in prison custody due to lack of fair hearing and should not be subjected to retrial as doing so will amount to double jeopardy. In a related development, ‎the court ordered a fresh trial for another suspect, Mr Mathew Ibiloye, whose right to fair hearing was breached. Jimoh and Ibiloye were arrested for armed robbery between 10 and 11 years ago and were convicted and sentenced to death. Shortly after the lower court sentenced them to death, their counsel, Musibau Adetunbi, appealed the verdict passed against his clients, saying that the Attorney-General of Ogun State was the prosecutor and the respondent in the case. Adetunbi told the court that a department in the state’s ministry of justice, Citizens’ Rights Department should not have been involved in defending the accused during the trial. To him, the action of the Attorney-General of the state in defending the accused persons offends the principle of natural justice. After parties in matter made their submission, Justice Mensem, in her judgement nullified the conviction and sentencing of Jimoh and held that, “In this appeal, it is certainly strange to this court and no doubt obnoxious to know that the defending counsel is the same as the prosecuting counsel in that the learned counsel each acted a s representatives of the Attorney-General of the Ogun State Ministry of Justice. Ibiloye was however not that lucky as the court ordered that his trial‎ should begin afresh.

Army To Probe Death Of Commander, Other Soldiers Killed By Boko Haram

17 Dead And Scores Injured As Fans Stampede At A Football Match In Angola. Photos

Nigerian Big Boy Sprays Over N2 Million At A Wedding In Owerri…. Photos/Video