Armed thugs yesterday allegedly invaded the Ladoke Akintola University of Technology (LAUTECH), in Ogbomoso, Oyo State and attacked some workers of Osun State origin. They allegedly told the workers to leave the institution or lose their lives. 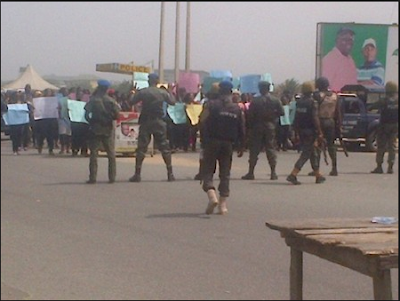 The thugs, according to an eye witness stormed the Bursar’s office, beat up the security guard on thir bid to attack the Bursar. But they were stopped by the Department of State Service (DSS) officials and policemen invited by the university. The policemen escorted the Bursar out of the premises. Another eyewitness explained that members of the Osun State House of Assembly Committee on Education visited the institution earlier to address their fellow indigenes following an appeal for protection. The witness said the lawmakers advised the workers to be calm assuring them of the Osun government’s protection. According to him, the lawmakers also advised them to stay away till the two owner-states resolve the crisis. His words: “Shortly after the lawmakers left, a major leader of the Ogbomoso Parapo, a socio-cultural union of Ogbomoso indigenes, led a gang of hoodlums to the institution. They first beat up a member of staff whom they believed hails from Osun State because of his surname Osunbade, though he actually hails from Oyo State. “From there, they stormed the Bursar’s office. On getting there, the security guard attached to the office prevented them from gaining entry but he was beaten to near pulp. On seeing what was going on outside, the Bursar, who is from Osun State, quickly locked his door from behind. The hoodlums, went to the window to threaten him that they would burn down his office if he refused to open. But as they were planning on what next to do, the DSSS people came. Then, they fled. The security operatives escorted the bursar out of the premises.” It was learnt that the bursar and the leaders of the thugs went to make statements at the police station. The attack caused pandemonium in the institution; workersran heter-skelter to escape from the touts. But Chairman of the institution’s Academic Staff Union of Universities (ASUU) Dr Biodun Olaniran, described the incident as minor. He said some thugs came to attack some ASUU members, adding that the case was reported to the registrar, who has taken appropriate steps. The National President of the parapo group, Saka Bello, did not pick his calls nor did he reply the text message seeking his reaction to the allegation. But the National Secretary workers of the Ogbomoso Parapo, Michael Abioye, denied that the group sponsored the thugs. He said staff members of Oyo State origin planned a meeting for today, pointing out that news of the planned meeting caused apprehension in the university. He said no thugs invaded the premises. Abioye said the change of ownership could not be achieved through violence but by peaceful means LAUTECH’s Public Relations Officer (PRO), Mr Lekan Fadeyi said he could not comment on the incident because he was not around. The Police Public Relations Officer (PPRO), Mr Adekunle Ajisebutu, was also not available for comments.

Men Spark Outrage After Posing For Selfies With Sex Doll In Front Of 9/11 Memorial. Photos

Two Day Old Baby Who Was Dumped In A Trash Can By Her Mother Rescued. Photos