Nigerian Army High Command has concluded plans to probe the death of the Commander of the 272 Special Forces Tanks Battalion, Lt. Col. Muhammad Abu-Ali, and six of his men in a Boko Haram attack at Mallam Fatori on November 4, 2016. 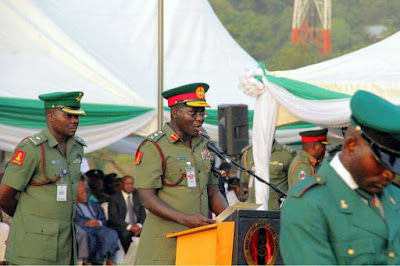 Abu-Ali, described as a brave and efficient Army commander and tagged by the Chief of Army Staff, Lt. Gen, Tukur Buratai, as the ‘Sarkin Yakin, (the frontline general’), and the six others were buried amid tears in Abuja on Monday. The six military men were Sgt. Mu’Azu Ibrahim, Sgt. Hussain Jafaru, Sgt. Bassey Okon, Cpl. Chukwu Simon, Able Seaman Patrick Paul and Prt. Salisu Lawal. It was gathered that Buratai, who wept uncontrollably while reading a funeral oration for the fallen warriors, had told his men that the circumstances surrounding the death of the soldiers would be probed. The Army chief was quoted as having said there was no place for saboteurs in the Army under his leadership. The late officer and his men were instrumental in the recovery of territories erstwhile under the control of Boko Haram, which include Monguno, Baga, New Marte, Bama, Gwoza, Banki Junction, Gamboru Ngala, Yale, Yemteke, Bitam, Doronaira, Kagarwa, Ärrege, Abadam and Mallam Fatori. Punch reports that while a decision had been taken to probe the circumstances surrounding the unfortunate incident at Mallam Fatori, a panel of inquiry was to be set up to probe the deaths. “The Army authorities have taken a decision to probe the death of the officer and his men, that is the arrangement but they have not constituted the panel of enquiry. The decision was taken shortly after the burial on Monday,” the source stated. “There are so many issues on the ground. The soldiers are complaining. There is a likelihood of internal sabotage in the war. And to worsen the situation, some of the state governors are not acting in a way to encourage the boys. “Even some officials of the state government are suspected to be in collaboration with these people. So most of the information the Boko Haram terrorists are getting is from civilians working with some military personnel around that place,” a source said. A military source alleged that while the insurgents attacked the convoy of the Chief of Army Staff, Buratai, in the operational area, no state government official and politician from the area had been attacked by the Boko Haram. “They suspect the state government officials, because since the beginning of the insurgency, they (Boko Haram members) have never attacked any government official, most especially the convoy of a state governor. “And whenever they bomb and attack anywhere, politicians would rush to the place to condole with the people of the place,” he said. However, the Acting Director, Army Public Relations, Col. Sani Usman, said it was important to wait for the outcome of the investigation in order not to jeopardise it.