Soldiers fighting insurgency are reportedly deserting their posts in the North East. It was gathered that the soldiers allegedly complained they have stayed so long on the battle field. 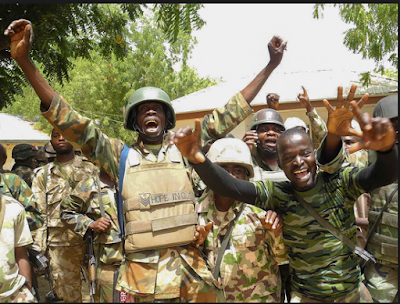 According to Daily Sun;

Top military sources in Abuja said that the soldiers, some of whom have stayed over three years in the region, are deserting the army at the slightest opportunity. These opportunities include getting “pass,” an official document of permit given to military personnel to travel out of their areas of operation. Some of them didn’t return to their base, it was learnt. Most of the deserters, Daily Sun learnt, are young soldiers. A top-ranking army source said this year alone, the army has recorded a high number of deserters but the authorities have refused to disclose the specific number. It was gathered that while the Nigerian Air Force ensure their personnel deployed to the north east do not stay more than one year before they are rotated and replaced with fresh personnel, those in the army have not been so lucky as some have been in the North East since 2013. Some troops of 242 Battalion who were drawn from Badagry, Lagos, in between June and November, 2013 are still serving in the North East. Aside 242 Battalion, troops of 93 Battalion Takum and their counterparts from another 333 Air Defence Artillery, who are scattered all over the North East are still in the region. Troops of 5 Brigade, who are scattered around Mungono, Banki, Maiduguri, and Gubio, are also said to have spent more than two years at the warfront. Some personnel who spoke to Daily Sun, narrated how some soldiers deliberately deserted the warfront after getting the mandatory pass, under the ruse of travelling to see their families. “They said the pass, which is not more than two weeks, is given to personnel after spending six months in the frontline, was not enough for them to solve family problems which emanated as a result of their absence and it did not give them enough time to stay with their children. “Others said their long absence has resulted in broken homes where some wives have had to divorce their husbands.”

It was also gathered that there has been reported cases of women carrying pregnancies of other men in the absence of their husbands.