John Tsoho, the judge handling Nnamdi Kanu’s trial, has returned the case file to Ibrahim Auta, chief justice of federal high court, for reassignment.  This was sequel to an application by the legal team of Kanu led by Chuks Muoma, claiming that the court was biased in its handling of the matter. 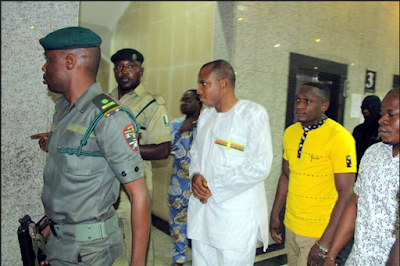 “We are only asking the court to hands off; my client has lost confidence in this court,” he said. He claimed that the court was acting in line with the suggestion of President Muhammadu Buhari that Kanu was not going to be released under any circumstance. The counsel said that if they did not get the relief they sought, they would proceed to the International Court of Justice. Muoma said any proceedings in the case, following the claim that a petition was written to the National Judicial Council (NJC) to protest against the court, would “stifle it”. “I understand that there is a letter to NJC, though I haven’t seen it and the CJ has replied saying that the matter will be investigated,” he said. “I would urge you that you transfer the matter; I would suggest that it be sent back to the CJ.” Responding, the judge said: “I have no interest in trying your matter and I will return it to the CJ, but I will condemn the attitude of that counsel. I do not care if you take your case to another planet.” He said that making a ruling on the said application was an attempt to “pre-empt” the outcome of the petition sent by Kanu’s lawyers to the CJ. However, in a ruling, the judge who prevented the prosecuting counsel from speaking, said: “This case is hereby transferred to the CJ.”