President Muhammadu Buhari says there can only be one head of a country, and at the moment, he is the one. In an interview with The Osasu Show, Buhari described reports of overbearing influence on him by some individuals as mere speculations. 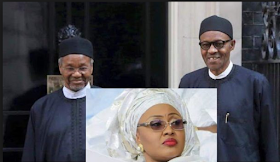 Asked to react to a report that “Alhaji Mamman Daura is the true president, while he’s the unofficial vice-president”, he said: “I don’t know where they get their news from. “I stood for the election, I visited every local government in Nigeria, I travelled by road, by air, and so on, and we had one of the most credible election. So whoever feels he has lost somehow is his own problem, I have no problem.”

Aisha Buhari made headlines recently for insinuating that her husband’s government had been hijacked.

BREAKING: Ex-Jonathan Minister, Laurencia, And Her Husband Kidnapped In Kaduna