Customs officers at a Austrian airport were left shocked after pulling over a suspicious looking passenger and discovered she was carrying her dead husband’s intestines. The woman, who had travelled from Morocco to Graz Airport, was passing through customs when officers thought she seemed nervous. 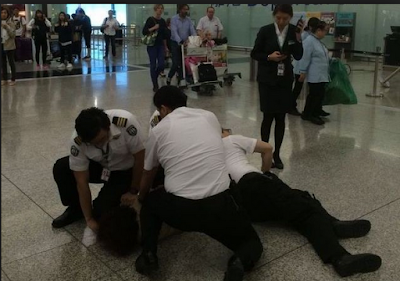 Officials then asked to inspect her luggage and according to the Austrian newspaper Kleine Zeitung, that is when they found the entails. She then told officials that the organ had belonged to her dead husband, who was also a Moroccan national. The intestines had been carefully wrapped and placed inside two receptacles. The unnamed female passenger then went on to explain that she suspected that her dead husband had been poisoned. She added that she wanted a toxicology analysis of his tissue carried out, so decided to travel with the body part.

Austria’s ministry of finance, which oversees customs in the country confirmed the discovery, but police said they had not been asked to intervene.

Schweinsteiger Steps Out With His Star Wife As He Returns From Man United Exile. Photos