Gov. David Umahi of Ebonyi has ordered that death sentences on 14 prisoners of Ebonyi origin in various prisons be commuted to life imprisonment. The governor gave the order on Saturday in Abakaliki during activities to mark the 56th Independence Day and 20th year of Ebonyi creation. 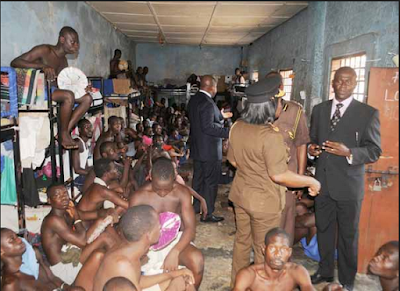 According to the governor, 32 inmates from the state have also been granted unconditional pardon for offences which they were jailed.

“The order is to the comptrollers of Enugu, Abakaliki and Afikpo prisons and pursuant to powers of Section 212 of the 1999 Constitution, as amended, conferred on me as the state governor. “These decisions were reached after due consultation with the state’s Committee on Prerogative of mercy and other enabling powers and this serves as the official warrant,” he said.

“Those who were pardoned unconditionally include Ogbuzuru Odoh, Ogbonnia Odom, Shadrack Eboko, Ezi Ekum, Nduisi Nwodo, Paul Una, Musa Bako, Chikwu Ndukwe, Mgbeleke Oduma, Ugo Ogbuba, among others. “The state Attorney General and Commissioner for Justice, Augustine Nwankwagu, is advised to submit report on the released inmates’ conduct to my office, to ascertain whether they still pose threat to society,” he said.

The governor also announced a five per cent increase in workers’ salaries with effect from Oct.1 and thanked labour leaders in the state for their understanding and support in reaching the decision.

“The government has also recalled the sacked workers of the state College of Education, Ikwo, and the 37 workers of the proscribed Ebonyi State Environmental Protection Agency “We would also release workers’ promotion results and look into the issue of pension and gratuity which totals over five billion naira,” he said.