A 43-year-old trekker, Abubakar Duduwale, yesterday morning began his mission to trek from Nigeria, starting in Kaduna, to the United Kingdom. Abubakar, a Chamba by tribe who hails from Yola North Local Government Area of Adamawa State, said he wished to raise awareness on terrorism and its effect on lives and properties of the people directly affected. 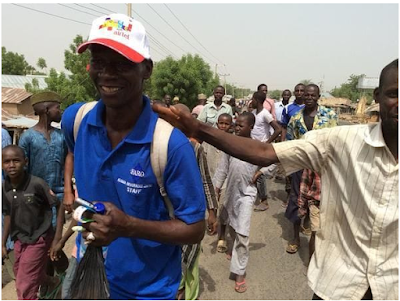 “I mean to pass the message that terrorism is evil and must be stopped,” he said. He explained that his journey which started yesterday from Kaduna around 8:00am would lead him to Niger State from where he would move to Abuja and then to the United Kingdom. Duduwale is a veteran trekker who, in a recent notable instance, trekked last year from Yola to Abuja to drum support for Muhammadu Buhari who, as president-elect, was waiting to be sworn in. He said of his mission, “I have trekked round the 19 northern states of Nigeria promulgating the gospel of peace and war against terrorism, insurgency, corruption, drug abuse as well as promoting unity. I started trekking in 2008 when I decided not to sleep in Adamawa State that particular day and I moved from my village to the border between Nigeria and Cameroon. My trekking is not for fun but for world peace. We must shun all negative tendencies.”

Passengers Remove Their Clothes To “Survive” After Being Trapped In A Train For Hours..Photos

“Go And Hang Yourself With Your Headscarf” — Trump Supporters Tell Muslim Teacher..