An overnight attack by gunmen on a police post in central Benue State has left at least four police officers dead, according to reports. The gunmen stormed the police divisional headquarters in Igumale, the headquarters of Ado Local Government Area, shortly after midnight on October 2, killing all the four officers on duty. 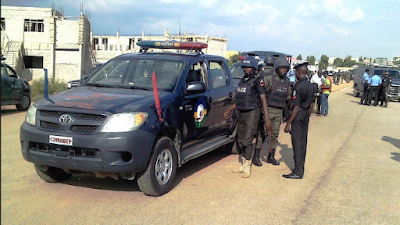 Read according to premium Times

Ajibo Ochulayi, a community leader in the agrarian town, told PREMIUM TIMES the attackers carted away the guns and ammunition of the officers. Mr. Ochulayi said while two officers died on the spot, two others later passed on in a medical centre in Makurdi, the state capital. “It is sad that the gunmen were able to overpower the policemen and killed all the four of them with little resistance,” Mr. Ochulayi said. He said the state’s police commissioner, Bashir Makama, visited the scene on Sunday afternoon with a few mobile police officers to assess the aftermath. Benue is one of the states in central Nigeria that have experienced deadly attacks in recent months due mainly to clashes between farmers and pastoralists. PREMIUM TIMES chronicled at least 1,269 deaths through herdsmen attacks in the last four years. But Mr. Ochulayi said police have only launched a manhunt for the assailants, and no one has been identified on the motive of the attack. POLICE YET TO SPEAK PREMIUM TIMES’ efforts to reach the police spokespersons for the latest on the attack were unsuccessful. When contacted, Ezeani Amaechi, who the police listed on its website as the public relations officer in Benue, said he had left the department.

He gave a number of a man he said is his successor, but the number was switched off after several hours of trying. The telephone number of Don Awunah, the Force PRO in Abuja, has been switched off for weeks.

Scores Of Pilgrims Dead After Fatal Accident On Their Way For Prayers In Makkah. Photos

Husband And Wife Married For 54 Years Die On The Same Day. Photos