Kogi State Governor, Yahaya Bello has been admitted into a hospital in Germany for eye surgery. The Governor was in Dubai en-route Germany for the operation, which is expected to correct an eye ailment that had been troubling him for sometime (see HERE). 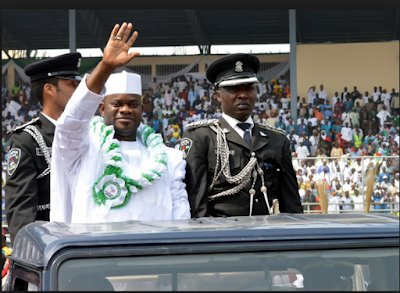 Punch quoted a senior official in the state as saying that Bello travelled with some close aides and officials for the surgery. It was gathered that the state Commissioner for Works, Land and Housing, Abdulmumini Sadiq, who earlier travelled with Bello, returned to Lokoja, the state capital, a few days ago to run some errands for the governor. The source added, “The governor is not missing as being speculated. The fact is that he has an eye problem and he decided to travel to Germany for medical treatment. “He actually travelled with some close aides, including about two or three commissioners. He is expected back in the state within two weeks, after he might have recovered from the effects of the surgery on his eyes.” All state functions have been put on hold leaving the Deputy Governor, Simon Achuba, with only the duty of receiving visitors on behalf of his boss. It was learnt that the Governor could not wait for a formal handing over to his deputy. The governor, it was further gathered, did not also officially notify the state House of Assembly of his foreign trip, contrary to laid down regulations. It was gathered that some of the cabinet members, including commissioners and special advisers, spent more time in Abuja, than in Lokoja, where they have their offices. “The commissioners and special advisers were just appointed to do nothing, because no money was allocated to their offices for the implementation of the budget. This is due to the fact that Kogi State is broke,” a source stated.

The absence of the governor has generated anxiety in the state, leading to rumours that Bello was down with a deadly ailment.