A Muslim teacher was told to hang herself with her headscarf in a frightening note which said it was no longer ‘allowed’ after Donald Trump’s election win. Mairah Teli received the frightening order in an anonymous note left in her classroom at Dacula High School in Dacula, Georgia, on Friday. 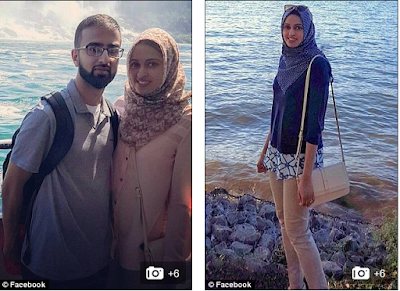 ‘Mrs Teli, your head scarf isn’t allowed anymore. Why don’t you tie it around your neck and hang yourself with it,’ said the message. The 24-year-old teacher said the note was a result of Trump’s election victory and an indicator of the escalating racism it has triggered.

‘I’m a high school teacher and sadly this anonymous note was put in my classroom today. ‘As a Muslim, I wear a headscarf as a practice of my faith. I want to share this to raise awareness about the reality and climate of our community. ‘Spreading hate isn’t going to “make America great again,”‘ she said in a Facebook post about the incident.

She accompanied the post with the hashtags ‘Donald’s America’ and ‘Here to stay’. Mrs Teli is a California native and works at the school as a language arts teacher. 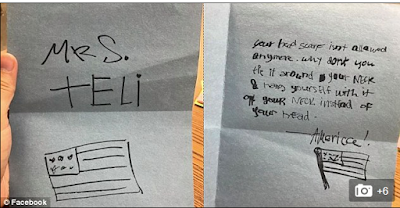 Buhari Absent At The FEC Meeting Again As VP Osinbajo Presides In His Absence. Photos