The police in Benue have confirmed the killing of Chief Awuhe Alev, the traditional ruler of Mabayongo district, in Katsina Ala local government council of the state 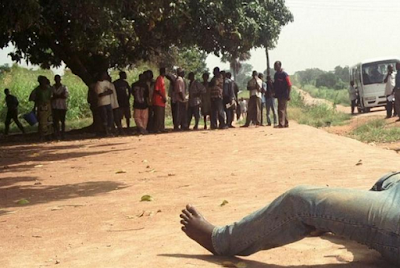 Confirming the incidence on Monday to the News Agency of Nigeria, in Makurdi, the police public relations officer, ASP Moses Yamu, said unknown gunmen invaded the traditional ruler’s house in Vingir village on Sunday night and shot him dead. He said the police had yet to discover the motive for the killing but added that investigations into the murder were in top gear and assured that the culprits would soon be arrested. The police spokesman said additional policemen had been deployed to the area to maintain law and order and appealed to members of the public with useful information that might lead to the arrest of the culprits to volunteer them to security agencies.

NAN reports that a village in Mbayongo had recently been under siege by security operatives in search of Mr Terwase Akwaza, the former Aide of Gov. Samuel Ortom, who had been accused of killing, kidnaping and cattle rustling.

See Incredible Photos Of Human Pyramid Which Have Gone Viral..