An Ibadan-based mother of seven, Idayat Adekunbi, has asked a Mapo Customary Court in Ibadan, Oyo State, to dissolve her 22-year-old marriage to her husband, Wasiu. The News Agency of Nigeria (NAN) reported that Idayat told the court that her husband often beat her and sometimes threatens to kill her. 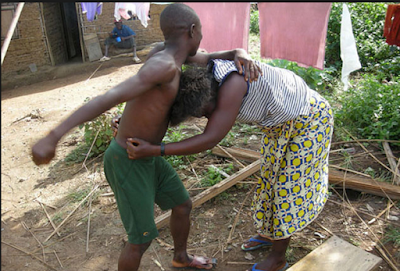 “My lord, Wasiu derives pleasure in beating the hell out of me not minding any circumstance. “In fact, he is sounding it as a note of warning to me that he would soon put an end to my life. “Aside from that, he does not have any regard for my relatives. “I have seven children and I want to reap the fruits of my labour,” Idayat said.

Wasiu, who agreed with the dissolution of the union, confirmed beating his wife.

“My lord, it is true that Idayat and I have been having running battle over the past 10 days over a pregnancy she could not explain. “For over three months now, Idayat has been starving me of sexual intercourse. “Let me state that Idayat and I are farmers and our farm lands are not within Ibadan.

“Sometimes, she may stay away from the farm for two to three months and I will be the one looking after the children. “So, when Idayat returned home ten days ago, I observed that her stomach was already protruding and she has started showing most of the symptoms she usually exhibits during pregnancy.

“When I asked her, she laughed and I told her to return the pregnancy to whoever owned it. “I reported the matter to her elder sister and parents, they all fought me. “For more than three months, Idayat did not allow me access to my conjugal rights,” he explained.

Mr Henric Agbaje, the presiding President of the court, asked the couple to go home and seek settlement through the intervention of elders.

Agbaje adjourned the case till October 19 for judgement.

See What Was Done To These Teenagers After Being Caught Stealing From A Shop. Photos

America Will Be Sexy Again -Thanks To The Incoming First Lady, Melania Trump.