An Islamic preacher identified as Muritala Oladipupo has been arrested and is currently cooling his heels at the Anti-Kidnapping Squad of the Oyo State Police Command for allegedly defrauding a woman…. 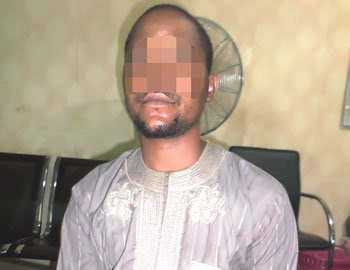 Read via Tribune Online; THIRTY-SEVEN-YEAR-OLD Muritala Oladipupo calls himself an itinerant Islamic preacher who also attends to people who come to him for consultations on spiritual matters. Going by the revelation of one Mutiat Azeez, who said that the self-acclaimed preacher swindled her on the pretext of praying for her, Oladipupo would have a lot of explanations to make to detectives at the Anti-Kidnapping Squad of the Oyo State Police Command where he is currently undergoing interrogations. Crime Reports learnt that the suspect was arrested in a mosque in Ibadan on August 28 after Azeez told the police that he defrauded her of N700,000 when she was deceived into believing that he was an Islamic preacher who could help her with prayers to solve spiritual problems. According to information gathered, Oladipupo adopted a method of proposing love to a potential victim so that it would be easy for him to penetrate her. He reportedly used this method with the victim and collected some money from her before his arrest. When interviewed by Crime Reports, the suspect confirmed the allegation, disclosing that he learnt the method from two men, Abdulwaheed and Ola Shehu, whom he met at a mechanic workshop. Speaking with Crime Reports, he said: “I was a Quranic teacher but later became an itinerant Islamic preacher delivering sermons. I fell into trouble when my former girlfriend asked me to carry out some rites for her to attack someone who swindled her. She became angry when she did not get the expected result. “I knew her about seven years ago and I expressed interest in her. I collected N360,000 from her but I also borrowed her N100,000. It is not true that I took N700,000 from her. The money she gave me was to buy the ingredients that would be needed for the prayers and the rites to be performed. “It was Waheed who introduced the idea of deceiving women by proposing marriage to them so that they could be easily swindled. The victim would be disclosing her problems which I would capitalise on to obtain money from her. Waheed said he gave the advice because most clients are not usually appreciative after getting solutions to their problems. I used to share the money given to me with the two men.” Oladipupo confessed to being a fraudster and spoke on how the lady was taken to a river in Ado Ekiti, Ekiti State, to bathe in a river. The suspect also said he invited two female syndicate members, Seun and Abibat, who dressed like white witches and prayed for the victim at the river side. “It is true I took her to Ekiti to have a spiritual bath to cure her of bad dreams. I asked Seun and Abibat to join her at the river side because they were women. They prayed for her and I paid them N10,000 each. They were introduced to me by one Ahmad who is also a fraudster based in Ado Ekiti. I knew Ahmad through Waheed and Ola Shehu,” he stated. The victim was also reportedly taken to a shrine at Moniya area of Ibadan where a pipe was laid underground and someone at one end spoke into it, the sound of which echoed like that of a spirit at the other end of the pipe in a room. Narrating how she met the suspect, the victim said he was in his vehicle at Olorunsogo area of Ibadan when he saw her and called her. This was confirmed by the suspect who said “I proposed love to her and she accepted. In the course of our relationship, she revealed her problems to me and asked me to pray for her and do other rites that would make her overcome them. I told her that I would help her solve her problems and started getting money from her through this.” The suspect, who is said to be one of the assistants working with a popular Islamic preacher in Ibadan, disclosed that his boss did not know he was into fraud. Confirming the arrest, the Police Public Relations Officer in Oyo State, SP Adekunle Ajisebutu, said he would be arraigned in court after the completion of investigation.

Imo State Government Comes To The Aid Of Woman Who Gave Birth To Triplets. Photos