Danladi Umar, chairman of the Code of Conduct Tribunal (CCT), has ruled that he will not withdraw from the trial of Senate President Bukola Saraki. Saraki had asked Umar to withdraw from his trial on the grounds that he was biased. 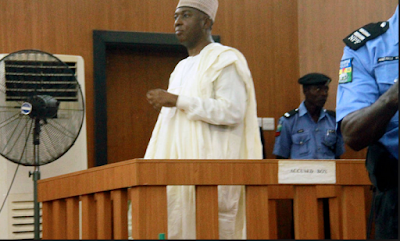 The senate president, through his counsel, Kanu Agabi (SAN), had said that he had no ‎faith in the tribunal to give him justice. He cited a statement wherein the chairman said that the defendant was afraid of “final consequences”, hence he was stalling the trial as a case of bias against the tribunal. ‎But in his ruling on Wednesday, Umar held that he would not withdraw from the trial because there would be no one to sit in judgment over the case. “The application to recuse myself has not been contemplated in the constitution. In the absence of a chairman, this trial cannot go on, therefore I cannot recuse myself. The chairman is the tribunal, without the chairman there is no tribunal.” he said. “The application of the applicant is founded on mere conjecture. The application of the applicant is not well-founded, it is hereby dismissed.” This is the second time Umar is dismissing Saraki’s application for him to withdraw from the trial. In April, Saraki had filed a similar application alleging corruption against Umar. Then, he alleged that the Economic and Financial Crimes Commission (EFCC), was using the chairman against him.

But Umar dismissed the application for lacking in merit.

Young Girl Rescued By Firefighters After Getting Her Leg Stuck In A Drain. Photos

Pretty Ladies Learn How To Fight After A Woman Was Abducted In A Chinese Hotel. Photos