It was a moment of joy in Alabama, South Africa, after twin paramedic brothers Dion and Dean Witkoei, helped a pregnant woman deliver her twin girls! Both families said what happened was a sign of much greater things to happen in their future. 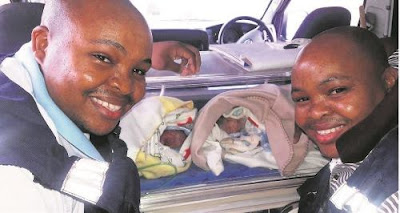 Dion and Dean (28) told Daily Sun they were off duty and relaxing after their Saturday night shift when a man came knocking at their door.

“It was at about 8am when we heard someone knocking frantically. We found a man who lives on the same street as us. He asked us to rush to his place,” said Dean. “They ran to the man’s house where they found his heavily pregnant wife ready to deliver.

“It was too late to get her to hospital and we helped her deliver the twins with ease. “Afterwards we called an ambulance and the lovely newborn girls were transported to Klerksdorp Hospital where they were assessed and admitted.

“We’re very proud of ourselves. This is what makes us love our jobs even more. It’s a miracle and doesn’t happen often. We feel blessed,” said Dion.

The twin girls are Angelika and ­Vanessa Jankies. Their mother, Yolandi Jankies, said she was very grateful.

“My Husband Is Drunkard And An Irresponsible Man” –Woman Tells Court.