Islamic extremists are celebrating Donald Trump’s shocking victory this week, claiming the election outcome proves half of Americans’ anti-Muslim sentiment, according to a group monitoring jihadism. 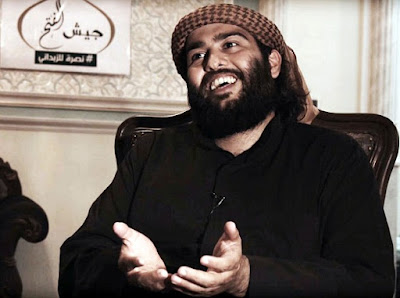 A senior al-Qaeda figure responsible for raising millions for the terrorist group and recruiting 3,000 child soldiers to fight in Syria has celebrated Donald Trump’s election win. Abdallah al-Muhaysini is a prominent member of the al-Nusrah Front’s inner leadership circle, which is al-Qaeda’s group in Syria.
In a series of tweets, translated by SITE Intelligence Group, al-Muhaysini called Trump’s election win an ‘important step’ for the terror group. ‘A brief comment on the on the winning of Trump against Clinton, the Presidential America’s elections,’ the first roughly translated tweet read. ‘From my point of view, the victory of Trump is an important step toward the victory of Alah al-Sunnah [Sunnis]!.’ Al-Muhaysini then went on to explain that he does not think American policy will change all that much, but he said the US’ ‘method of war tactics’ have changed from ‘the secret to the declared’. ‘This is good… Obama depended on the idea of zeroing in on the battles and targeting the headquarters, and Trump depends on gaining from the wars and countries based on the principle… the victory of Trump may be an initiative towards bloody battles and a huge mess. 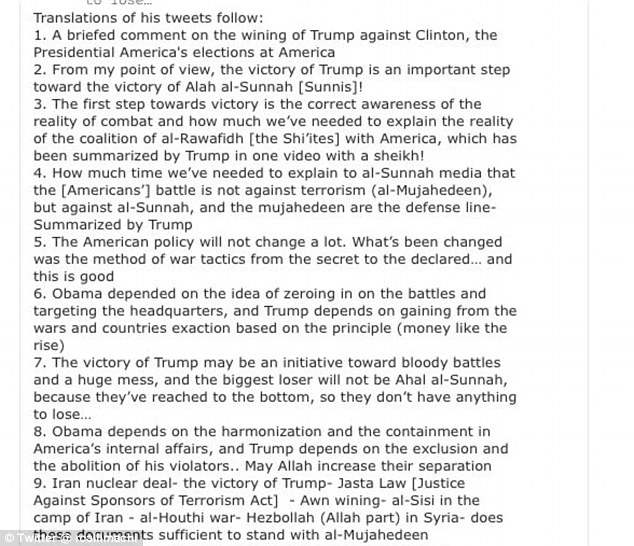 ‘The biggest loser will not be Ahal al-Sunnah, because they’ve reached to the bottom, so they don’t have anything to lose.’ The terrorist continued in his tweets to point out perhaps the biggest advantage to the extremist group of a Trump presidency. ‘Obama depends on the harmonization and the containment in America’s internal affairs, and Trump depends on the exclusion and the abolition of his violators… May Allah increase their separation.’