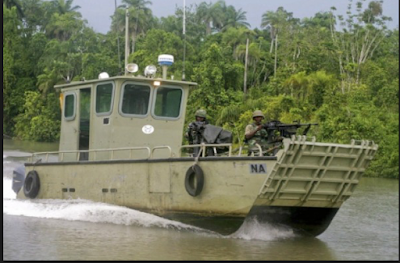 A source told newsmen in Warri that the military personnel stormed the camp with two Fighter Jets and about eight Gunboats at about 6 a.m. The camp was said to be an abandoned hideout used by the former militant group, Movement for the Emancipation of the Niger Delta and now occupied by sea pirates. The JTF were said to have acted on a tip-off on a raid that lasted for about an hour. The source said, “Information about casualties is still unknown. “The raid caused tension among dwellers of riverine communities as residents fled for safety.” The Sector (1) Commander of the JTF, Col. Alhassan Grema, confirmed the raid but declined to give details.

See What FUNAAB Students Did To A Thief Who Stole Tecno Phone During Protest.

Euro 2016; Another Violence Recorded As Germany And Ukraine Fans Clash Ahead Of Match. Photos