It’s no doubt that the heroic officer, Lt. Col Mohammed Abu Ali, who was killed by Boko Haram terrorists, was really loved by citizens and fellow colleagues. Read the trending powerful tribute, his friend and fellow soldier wrote. 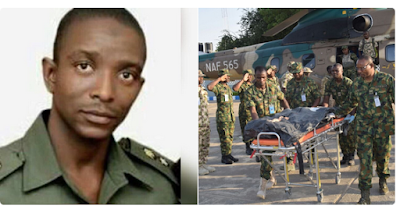 O Allah! Muhammad Abu Ali, my brother, my friend and my boss. A humble, simple and epitome of humility. U were indeed a source of inspiration, a confidence builder and a game changer. When pple mention only Baga as ur success, I said how???Because Baga is the least of ur treasures. U started from yola axis which u cleared n liberated all the communities under BHT.

U were later moved to Borno to continue when all loc were under the control of BHT less konduga and damboa. U led the operation to capture Mongunu n later Baga. U were brought to us in konduga when we failed to mov fwd after several attempt n we were pushed back by BHT on that axis.

With ur arrival, everything changed. U led us thru Yale to capture Bama, Banki junc, Pulka and Gwoza. I remember when BHT lowered and fire 105mm pack hewitzer on ur tank, used VBIED to charge thru ur tank during d battle to capture Gwoza. We were all crying and shouting thinking something bad have happened but the Almighty said it was not yet ur time.

On hearing ur voice on radio, sldrs begin to jubilate as ur voice alone boost our morale n we became more violent toward BH, catching them by hand. I remember when u use to tell us gentlemen just follow me behind and do only 5 per cent n I will do the 95%.
U were the first to enter Sambisa after u led the capture of Yemteke and Bita when Bita became impossible. U led the adv into Sambisa and rescued the first 296 women. They sent a helicopter to carry u from there for u to lead another offensive to capture Gamborun Ngala. 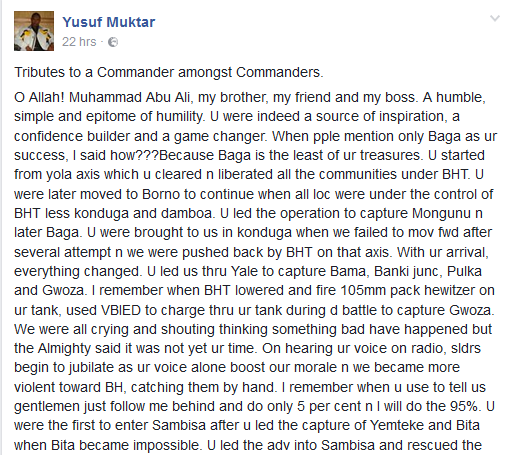 A job u accomplished without hesitation. I remember, u left me in Gwoza and after every 2 days u call or chat to hear how I am doin. And when BHT starved us for good 5 days of continues attk in Gwoza, u always call to offer me advice on how to go about. Ur advices had really worked as we always beat them. Abu Ali. U are d only person in the NA that can do what u did to dis country.

U took part and led all the major operations to liberate all the communities and clear all BHT hide outs and enclaves in the NE from Yola to Borno. Only God can pay u. And I pray that God grant u jannatul Fiddausi and give ur family and all of us the fortitude to beer this irreparable loss. Adieu my mentor and brother.

Properties Destroyed As Fire Guts Boys' Hostel At A School In Lagos. Photos