A man has escaped death by the whiskers as a moving train crushed his leg and hand, at Ajayi Farm bus-stop, opposite Adegbola street, in Ikeja area of Lagos State, yesterday. 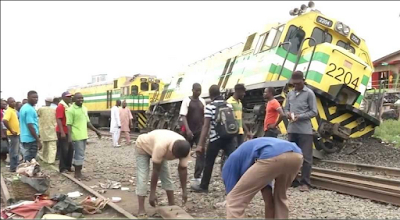 It was gathered that the victim was crossing the railway but unknown to him a train was moving closer to him. Some sympathisers at the scene said the noise of the moving cars along the Oshodi Iyana- Ipaja expressway would not allow a passerby to hear the sound of a moving train. A sympathiser, Clifford Anyanwu disclosed that before the victim could notice that a train was close by, it was too late. “Though the man tried to escape from the railway, the devil was already there to avert his escape. His trousers hooked a protruding iron in the rail which made the train to meet him and crushed one of his legs and one of his hands. The man wept profusely and even some women were crying for him. Many prayed that he survives the tragedy,” he said It was gathered that the driver of the train which was moving towards Oshodi area did not hoot its horn from afar to alert people that such heavy vehicle was approaching. An eyewitness, who identified himself simply as Mama Adesua said, “They were two who tried to cross the railway. One noticed that the train was coming and quickly crossed while the other (the victim) did not and has paid dearly for it. All efforts he made to escape proved abortive because he was under tension and the rail iron has held his trouser, causing the train to crush his leg and hand. I and other women were crying like babies when we saw the helpless man in the pool of his blood.” It was gathered that policemen attached to Man Centre police station were at the scene and they assisted alongside some sympathisers to rush the victim to Lagos State University Teaching Hospital (LASUTH), Ikeja.