A married lesbian couple, currently in hiding, is determined to fight until the bitter end for their right to live where they choose. Nonkululeko and Nokuthula Mthembu, both aged 30, from KwaNgcolosi near Durban, South Africa, intend to approach the Equality Court this week. 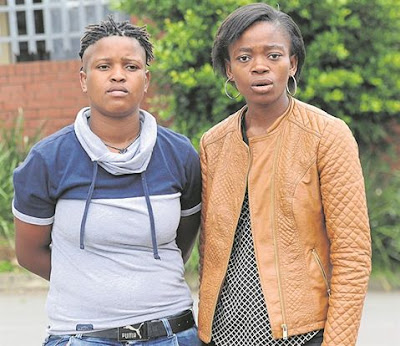 “It is our constitutional right to live freely in the community without being discriminated against because of our sexuality,” said Nonkululeko.

They were allegedly forced to leave their home last week after a series of clashes with a man identified as Mlethwa Ndlela. “We had a good relationship with Ndlela when we arrived in May but it turned sour early this month when he found out that we were married. He and his family would come to our house and hurl insults at us, saying we were ruining the reputation of his village. He said he had initially thought we were sisters,” claimed Nonkululeko. “Ndlela said he would send amabutho to demolish our house,” she claimed. “He also accused us of selling drugs. We obtained a protection order against him but he refused to sign it. Cops could not open a case but advised us to go to the Equality Court.” Nokuthula said: “We fled from the area because residents didn’t approve of our marriage.” When Ndlela was approached for comment he said he was unwilling to give his version of events. “I will meet with the traditional leadership on Friday to discuss this matter.”

Usain Bolt Parties With Different Women For The 4th Night In A Row…. Photos