In this interactive session with the standing committee members of the Nigerian Guild of Editors, Rivers State Governor, Nyesom Ezenwo Wike talks about his struggles as a governor, projects, the rerun elections, foreign scholarships and and security issues in the state. 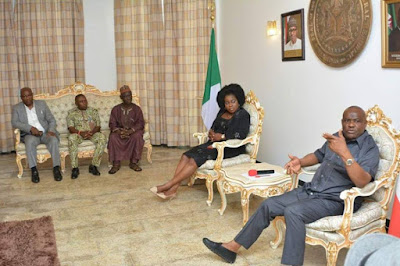 Excerpts : MY STRUGGLES AS A GOVERNOR Nobody has had the type of legal tussle we have had. Mine started before my inauguration. Of course, attempts were made to make sure that I was not inaugurated. To tell you how bad it was, I was not allowed to use the police ceremonial vehicle for my inauguration. We had to borrow from Ondo State. We thank God that has passed but I have to give you the background. Thereafter, the legal tussle continued until January 27, 2016 when we were free to move forward. If you compare from June, May 29 was on Friday and work started on Monday. From that time to January 27, 2016, it was one problem or the other. From the Tribunal to the Court of Appeal to the Supreme Court . When you have such problems, you hardly can be focused. But I thank God that we were focused and we did not allow that to distract us. INITIAL CHALLENGES RESOLVED When we came on board, we inherited four months salary arrears and six months pension arrears. We give God the glory that we have been able to pay all. The then Sharks of Port Harcourt, Dolphin and Rivers Angels were owed for eight months. We were able to clear that. And we said , with the economy, it would be difficult for us to maintain three clubs. For Sharks and Dolphin , we had to merge them to form Rivers United. The club is doing well and it is contesting for the league. SECURITY IN THE STATE As regards to security, I have always maintained that nobody should politicise security. Because when you begin to politicize security, the society will be in trouble. I think I am the only state governor who has had more than four Commissioners of Police since I became governor. Each time, they change a Commissioner of Police when an election is approaching. When the election is over , they bring another one. That is how they change the Director of the DSS. This is not helping anyone. When a Commissioner of Police is settling down to plan with the state government on how to improve security, they transfer him, bring another person and the process starts all over. I ask myself what is the benefit of these frequent changes. There are people who believe that there should be crisis in this state. Who will it benefit if there is crisis? When we had cases of kidnappings, instead of others to sit down with the state to resolve the challenge, they started making unreasonable remarks. So I ran to God to pray. God now helped and the problem has been transferred to other states. Now, we have kidnapping everywhere in Nigeria. In some states, they kidnap diplomats and traditional rulers .Kidnapping is almost gone here. It is not by my power , it is by God’s grace. When they said they will declare State of Emergency here, I said God save me and He saved me by pushing insecurity to other states. Kidnapping is now a national crime. ON PIPELINE VANDALISM This is the only state that you have not seen oil pipeline vandalism. I believe in the unity of this country. I believe that if the economy collapses, the state will collapse. We are doing everything to make sure we don’t have that kind of crisis here. What the Federal Government should do is to give us support to consolidate our security measures. RIVERS STATE IS FOR PDP There are states that traditionally belong to a political party. Even in the United States , you have states that are for Democrats and those that are for Republicans. You also have swing states. In Nigeria, there are states that are traditional to some political parties. Rivers State is one of such states. It belongs to the PDP. When you use force to attempt to collect it, you cause crisis. People will resist. When you want to steal the mandate of the people, it is more heinous than other crimes. Stealing the mandate of the people is a serious crime and it is worse than armed robbery. The difference is that while the ordinary armed robber uses arms to steal money, this political armed robbers use arms to steal votes. When you are armed to snatch ballot boxes, is it not armed robbery? It is even worse . If you have in mind to commit election robbery, the people will resist it. That was what happened during the March 19 rerun elections. They came to rig us, so that they will have the number in the Assembly to impeach me. You know they cancelled over 90percent of the Assembly seats and everything for the National Assembly. So they came to rig the elections. I told them to have a rethink because it would not be easy to do that in Rivers State. 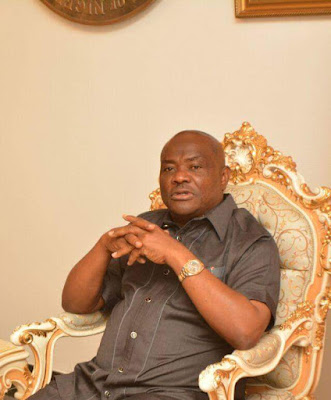 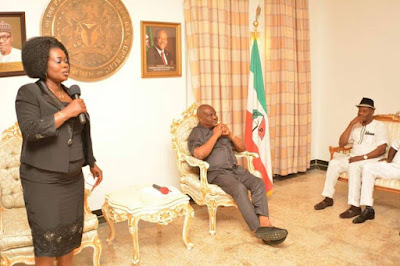 See What They Did To This Man For Allegedly Duping Woman Of N1.3M In Delta. Photos

Joyful Yahaya Bello Celebrates With Aides After His Election As Governor Was Upheld . Photos