The Kaduna State Command Of National Drug Law Enforcement Agency, (NDLEA) has arrested nine suspected drug addicts and peddlers while seizing illicit drugs worth over 30 million Naira from them in Zaria, Kaduna state. 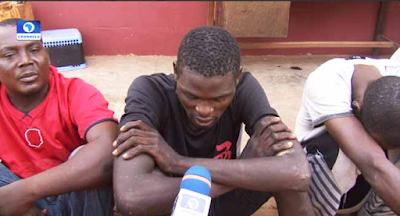 Parading the suspects before journalists at the command’s headquarters in Kaduna, the NDLEA State Commander, Samuel Azige, said that the suspects were arrested during a raid at their hideouts in Zaria where they stored the illicit drugs in a warehouse. According to him, preliminary investigations revealed that they stored the cartons of banned Tramadol drugs, weighing over 500g, inside a warehouse from which they sell them to ready buyers. NDLEA, drug trafickers, KadunaHe explained that the drugs, apart from being banned by the World Health Organisation, had also expired and had therefore become harmful for human consumption. The NDLEA boss who stated that the suspects would be charged to court as soon as investigation is concluded, said they had constituted a nuisance as they were also engaged in all forms of vices in the area. Furthermore, he said the command had made several seizures of illicit drugs amounting to over 20 tons as well as over 50 arrests since the beginning of 2016. Mr Azige vowed that the agency would not relent on the war against drug abuse and trafficking.

He also warned parents to be mindful of the activities of their children, stating that they are the most vulnerable to drug abuse.

“All My Husband's Enemies Pretending As Friends, God Will Expose Them”– Fayose's Wife Spits Fire..

Lady Among Gang Of Interstate Armed Robbers Arrested By Police In Edo. Photos