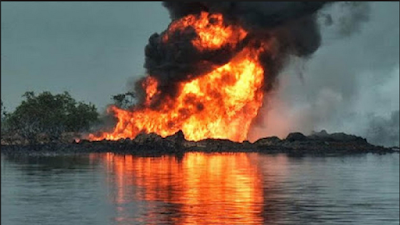 The latest attack is coming less than 24hours after four community surveillance guards escaped death at Batan community near Warri when suspected militants opened fire on them during a failed attempt to explode the pipeline under repairs. Though details of the attack was still sketchy as at the time of this report, locals in the area said they heard a loud bang followed by a huge ball of fire at the scene of the incident. Claiming responsibility for the attack, the Niger Delta Avengers, NDA on it’s twitter @Agbinibond handle in the early hours of Wednesday, admitted that they carried out the attack. It said: “Today (Tuesday) at 10:45p.m, our Elite Strike Team (Strike Team 6) has blown up the Forcados Export Pipeline,” the group said in a tweet at about 4.00 a.m. Giving reasons for the attack, the group said: “The action is to further stress that we don’t appreciate the repairs of blown pipelines.”

Apostle Suleiman Accused Of Dumping Pregnant Canadian Lover As She Gets Her Detained In Lagos. PICS