A woman got so fed up after her boyfriend got drunk in Thailand so she filmed a ladyboy waking him up in the morning pretending they’d had sex….Czech prankster Čeněk Štýbl was tricked by his girlfriend Lenka into thinking he had cheated on her. She said Čeněk got ‘totally drunk’ and fell asleep at their hotel, just off the infamous Khaosan Road party street. In the amusing, if a little cruel, video footage, the boyfriend struggles to believe what could have happened. Little does he know Lenka is hiding in the cupboard finding it tough to hold back the laughter. And the whole prank is caught on a hidden camera hidden in the hotel room. The video’s introduction reads: ‘It was our last night in Bangkok and Cenek got totally drunk and fell asleep. I was bored so I went to Khaosan Road in front of our hotel and there were many ladyboys and I got an idea.’ And when Čeněk sees the ladyboy he backs away in shock, screaming: ‘You’re not Lenka. What the f***? You’re not my girlfriend. What the f***? No, no, Lenka, where is Lenka?’ The ladyboy responds: ‘I don’t know, it’s just me here, and we did it,’ while holding up condoms. Lenka eventually comes out of the wardrobe to the disbelief of her boyfriend. 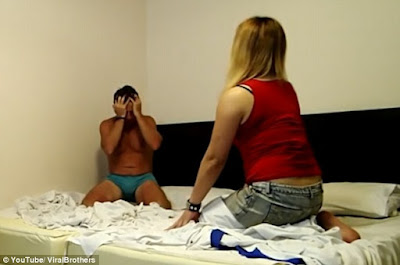 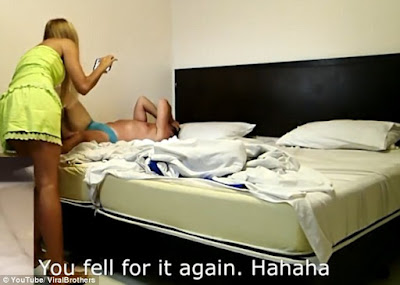