A Chinese wife decided to get her own back on her husband after she found him talking to other women via a messaging app online. The wife got her husband to confess his wrongdoings while she scorned him as she sat in bed. 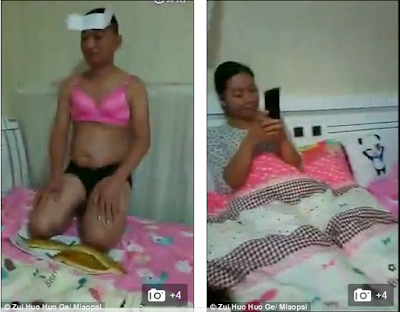 The man can be seen crying in pain and embarrassment throughout the video which was uploaded on October 31. The man, wearing a pink bra and black boxer shorts can be seen kneeling on the spiky skin of a durian fruit, which has a strong smell and is popular in south-east Asia. The man promised he would never do it again.

Checkout This Latest Keke Napep Which Is Fully Air Conditioned….Photos