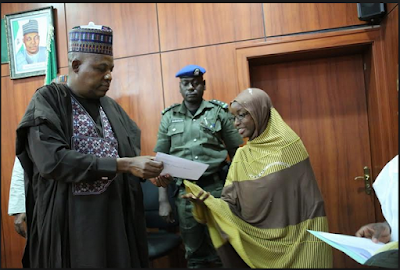 He told the final year examination class students that those who could not make it would have to wait until next year. Governor Shettima, who spoke through the state Commissioner for Education Malam Musa Inuwa Kubo, said Borno state government under him had been paying the fees of WAEC/NECO for students every year, but with closure of the schools for the past two years, some of the students who had overstayed at home without reading, might not be fit to write the 2016 WAEC/NECO, stressing that insinuations going round that government would not pay the bills for this year was false.

He said there was the need for the students of SSIII to undergo test, so that those who passed the Mock Exams would be paid their WAEC/NECO, saying, government would not be happy to expend millions of naira in fees without proportionate number of students performing credibly.

Lady Reveals How Her Wig Was Removed By A Bus Conductor During Fight..Photo