Philippines President Rodrigo Duterte has expressed regret over his ‘son of a bitch’ remark while referring to President Barack Obama. 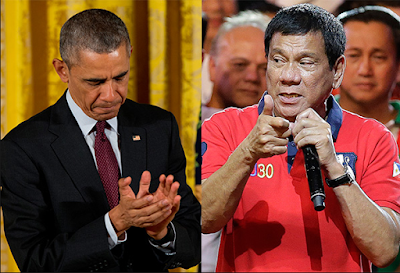 In a statement read out by his spokesman on Tuesday, Duterte said his ‘strong comments’ to certain questions by a reporter ‘elicited concern and distress, we also regret it came across as a personal attack on the US president’. Duterte, had earlier warned Obama not to ask about extrajudicial killings during a planned meeting in Laos or ‘I will swear at you’. He made the remarks Monday before flying to Laos, where he will attend a regional summit. Duterte had been scheduled to meet Obama separately. But Obama indicated that he was having second thoughts about that meeting. He said both sides mutually agreed to postpone the meeting. Even though Duterte’s latest comment does not amount to an apology, the expression of regret is a rare instance when the tough-talking former mayor has expressed contrition for his remarks that often slide into profanity. ‘We look forward to ironing out differences arising out of national priorities and perceptions, and working in mutually responsible ways for both countries,’ the statement said.

Caption These Photos Of Soldiers On Operation In Sambisa Forest

Confusion As Man’s Corpse Is Found Floating In A Hotel Swimming Pool In Lokoja….