Four members of the dreaded Awawa cult group have been arrested by the Lagos State Police Command. It was gathered that suspected members of the group, who were armed with dangerous weapons, were on rampage around Kadiri area of Dopemu, when they got arrested. 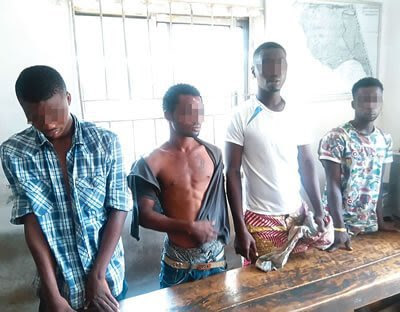 Policemen from Dopemu Divisional Police Station, who responded to a distress call, arrested the suspected cult members where they were hiding . The image maker in charge of the state police command, Dolapo Badmos, while confirming the arrest of the suspects to the Metro, said the cult members were arrested with varying degrees of wounds. . A police source at Dopemu Police Station, who pleaded anonymity, while speaking with Metro, said the cult members were early Monday terrorising residents and passersby around Kadiri area. The police source also stated that the cult members, numbering over 15, took advantage of the confusion created by their activities to rob unsuspecting residents and passersby. The state police spokesperson said “Today, at about 0930hrs, the command, through its operatives from Dopemu division received a distress call that some bad boys popularly known as ‘Awawa ‘ were on rampage in Kadiri area in Agege, wielding dangerous weapons. “A patrol team was drafted to the area, where four male suspects Sherif, Ismail, Amusa and Abel were arrested with various degrees of injuries, all hiding in a building at No 29, Abeje Street. “The Commissioner of Police has directed the suspects be transferred to SARS, be given medical care in custody while discreet investigation should be done to also apprehend fleeing suspects, while the suspects will be charged to court at the conclusion of investigation. “The command will no longer tolerate any act of impunity and recklessness under any guise of cultism,” the police spokesperson added .

Army Hands Over The Rescued Chibok Girl And Her Baby To Borno Government. Photos

Daniel Amokachi Poses With AFCON Trophies He Won Both As Player And Coach. Photos

Man Mistakenly Slices Through His Neck While Renovating His House. Graphic Photos