The Enugu state command of the Nigeria Police Force through its operatives on 24/8/16 , smashed notorious armed hoodlums that became a torn of the flesh of members of the public within Edinburgh road/ogui new layout axis and its environs. 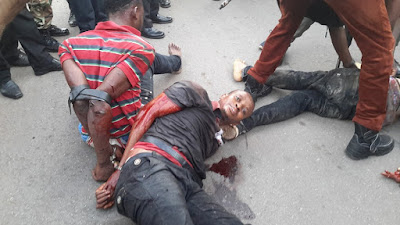 It was however gathered that armed hoodlums numbering four had allegedly held Edinburgh axis to a standstill shooting sporadically before the operatives of the command acting on the report swooped on them. On observing the police operatives,the armed hoodlums tried to escape through various routes known to them but could not as all the areas had been locked up and which made the hoodlums who had earlier snatched a Hilux van belonging to one of the tertiary institution in the state from the driver and headed towards Bisalla road axis of the state where the police operatives of the command engaged them in a serious gun duel that ensued which forced hoodlums to abandon the said van and escape into a compound surrounded by bush within the bissala road axis of the state. The operatives not relenting,pursued the hoodlums to the compound and later traced them into one of the room ceiling of a house in the compound where gun duel ensued and which led to the death of one of the hoodlums and leaving three of the hoodlums fatally injured and arrested. Recovered from the hoodlums are two AK47 RIFFLE with double magazines. Meanwhile,investigations into the incident have commenced just as the state commissioner of police Emmanuel Ojukwu has applauded the effort of the operatives of the command leading to the arrest of the four of the armed hoodlums and recovering their arms. The injured police officer Sgt Kingsley Chuwuamago from the special Anti Robbery Squad Enugu who was knocked down by the second vehicle of the hoodlum as he started engaging them at mkpokiti Enugu is responding positively. 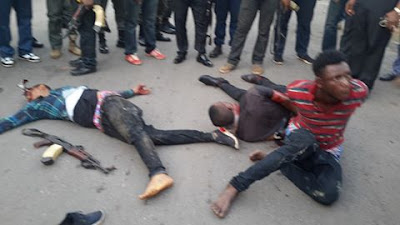