The Rivers State Assistant Commissioner of Police (ACP) incharge of medical, Dr. Emmanuel Eze has been accused of assaulting a Lagos pastor, Johnson Dominic over land dispute. Dominic, the pastor in charge of New Jerusalem Parish of the Celestial Church of God, Ogunse, Onosa Avenue, Ibeju Lekki, is currently being treated at a hospital in Jakande following the alleged attack. 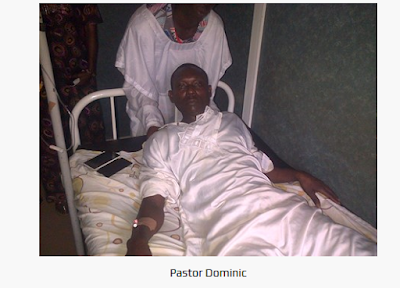 Speaking from his hospital bed Wednesday, Dominic alleged that the ACP and four of his men stormed his premises in Monday and dragged him on the floor. According to him, he was beaten to a pulp because he refused to relinquish the plot of land he bought from the ACP at N1.2 million without a refund of his money. Dominic who claimed to have known that ACP for some years, said he was looking after about 16 plots of land the police boss bought in the area. Despite a plot of land at the area being sold for about N700, 000, Dominic claimed he paid a million naira and later added N200,000 to get one of the ACP’s plot beside his church. However, he alleged that the police boss turned around and demanded more money from him, a demand he was not willing to fulfil. Following his refusal to pay more money, the pastor alleged that the ACP threatened him to leave the plot of land and accused him of encroaching into his property. He said: “What happened was that I was in the church around 5pm, attending to the people coming for prayers. I saw the ACP and his convoy. They beat me up and dragged me to the floor because I demanded a refund of my money if he insists on getting back the plot of land he sold to me. “We had known each other for some years. The ACP bought 16 plots of land beside my church and he asked me to take care of it. Later, the ACP said he was going to sell six plots and I should get buyers for him. He said he was selling each for N1m. “I asked him to map out the land, so that people could buy. I told him I needed a plot beside my church so that one of my members could use it for a mechanic’s workshop. “Ordinarily, lands sell for N700,000 in the area, but he asked for N1m and I paid him. I paid the money in February last year. He later said he was not selling the land again for N1m and he would demand N1.2m, which I balanced him N200,000.” But Eze denied the allegation, insisting that neither he nor the four pastors who went to the site with him touched the victim. Contrary to Dominic’s claim that the issue was about the plot of land he bought, Eze said he discovered that some the rods he kept under the man’s care were missing. He said: “Firstly, I don’t have boys and I went to the site with four of my pastors. Secondly, neither I nor the pastors touched him. No one went close to him. I have lands there I have bought as far back as 2006. I have known the pastor for some years and left him in charge of them. “The issue isn’t about the land he bought, which he hasn’t finished paying. What happened was that, I left 100 rods there and when we got there on Monday, I discovered that only 92 were left. So, I called him and they said he’s been fasting for two days. It was in the course of asking about the rod that we started shouting. “Then, he went into his house and came out and fainted. I was the one who put him in my car and took him to the hospital because I am a doctor. He was revived and discharged. Did you see any injury on his body since he said we dragged him on the ground? I don’t know what he wants to achieve, maybe he wants to take over my property from me, I don’t know. “The land he’s claiming to have paid N1.2million on, he hasn’t even completed payment. There’s a Colonel who wanted to buy a plot from me at N2.5 million, which I refused to sell. Then, the pastor went behind me and collected money from him in a bid to resell the one he bought from me, which he hasn’t finished paying. But that wasn’t even the issue on Monday. That’s the truth.”

Culled from The Nation