A disposable device that looks like a USB memory stick based on a mobile phone chip that can take a drop of blood to determine the amount of HIV Virus in the blood; has been developed by a group of scientists from the Imperial College London and DNA Electronics. 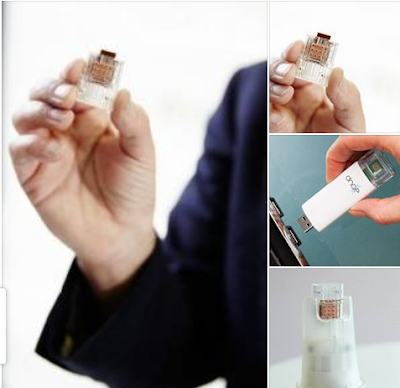 The revolutionary gadget creates an electrical signal that can be read by your laptop or other device to detect a HIV patient’s virus quantity according to the Washington Post. If the technology is perfected it could identify all sorts of foreign invaders in the blood from hepatitis, bacterial and fungal sepsis. This gadget will be able to measure the levels of the HIV virus to give the severity of the disease helping one to know if medication is working or change to other drugs.

“At the moment, testing often requires costly and complex equipment that can take a couple of days to produce a result. We have taken the job done by this equipment, which is the size of a large photocopier, and shrunk it down to a USB chip,” said Graham Cooke, one of the study authors and a clinician scientist in Imperial’s Department of Medicine

Over Speeding Driver Crashes Into A Street Pole In Lagos. Photos

British Soldiers Share Photos Of Girls They've Had Sex With In Their Barracks. (18+)

See What This Young Man Did After Escaping Fatal Fuel Tanker Explosion. Photos