And the online trolls won’t stop coming for president Barack Obama, whose party and candidate lost in the 2016 US presidential election. Here’s a photo-shopped picture of Barack Obama being arrested by his “political enemies”…From left to right; US president-elect Donald Trump, UK politician/Brexit leader; Nigel Farage and Russian president; Vladmir Putin. 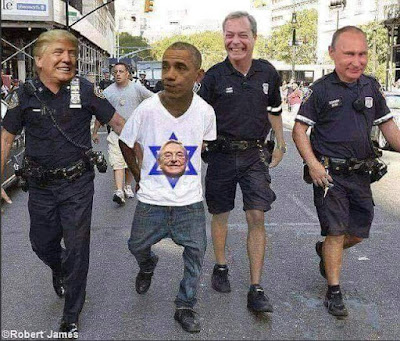 Meanwhile, Putin has already congratulated Donald Trump on his election victory as Nigel Farage is hoping to meet the President-elect in New York on Saturday, after forming a close friendship with him during the US election campaign.

See What A Talented Sculptor Did With Governor Obiano's Image. Photos

See How A Nigerian Man Celebrated His Beautiful Wife Whom He Met On Twitter. Photos