A soldier, Musa Lawal, attached to the 13th Brigade of the Nigerian Army was on Thursday kidnapped by unknown gunmen along the busy Calabar Road in Calabar, Cross River State. 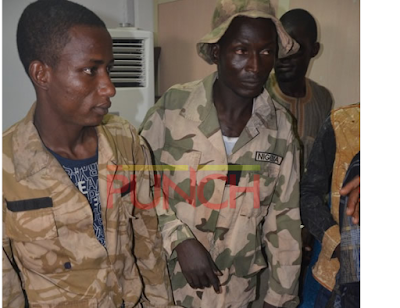 Lawal had just stepped out of the bank when the gunmen bundled him into a waiting vehicle and whisked him away to an unknown destination. An eyewitness, Emma Abang, said the incident happened at about 10a.m in the presence of security officials in the bank. He said, “The army officer was kidnapped in front of one of the popular banks along Calabar Road after he had finished his transactions. “It was not clear whether they kidnapped him because of the transaction he went to carry out; but they just whisked him into their vehicle and zoomed off. They took him to an unknown destination.” A security operative, who prefers anonymity, confirmed the kidnap; but the Army Public Relations Officer in charge of 13 Brigade, Calabar, Capt. Kayode Owolabi, said he was not aware of it.

Confusion As Family Of Doctor Who Committed Suicide Rejects Corpse…

Male Tigers Caught Fighting Each Other In The Woods Over Female Tiger. Photos