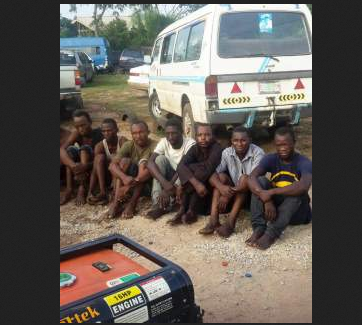 Lekan Akinola, Mutiu Oyekan, Akeem Sanusi, Olahusi Rasaq, Kazeem Oladipupo, Waheed Amusan and four others were arrested Tuesday after police tracked a mobile phone they stole from one of their victims at Arigbajo in Ogun several months ago. It was gathered that the unnamed victim had reported the case at the police and the Zonal Intervention Squad (ZIS) was deployed to fish out the hoodlums. The Nation gathered that the detectives with the corporation of police ICT experts arrested Akinola, who then led the team to his other accomplices. Contacted, the zonal spokesman, Muyiwa Adejobi, a Superintendent of Police (SP) said the suspects have confessed to have robbed residents of Ibafo, Ifo, Ewekoro, Mowe, Adigeb in Abeokuta, Iju Ota, Alakuko and Agege in Lagos. Adejobi said some of their robbery victims have been identified and their items recovered. He said: “Items recovered from them include refrigerators, laptops, plasma television sets, generators, wears, electrical appliances and their operational vehicle, a Mazda Bus marked Lagos BDG602XM.

“AIG Abdulmajid Ali has directed that the suspects be charged to court without delay, and that fleeing members of the gang should be apprehended immediately.”

“I Used To Deceive Myself Before” — Says Former Pastor Turned Traditionalist. Photos

James Ibori Holds Prayer Session In His London Home After His Release. Photos