The Economic and Financial Crimes Commission on Friday November 25, 2016 arraigned one Folashade Olukemi Adeleke before Justice O. O. Majekodunmi of the State High Court sitting at Abeokuta, Ogun State on a 2- count charge bordering on stealing. She however pleaded not guilty to the charges. 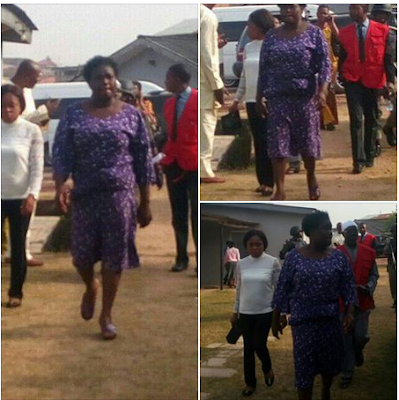 One of the charge reads: “That you Folashade on or about the 18th of November 2013 at Abeokuta within the Abeokuta Judicial Division stole the sum of N4,000,000.00 (Four Million Naira) only property of mrs Virginia Ngozi Ojelade which sum you receiver as part payment for the purchase of a property situate and lying at Ajebo Road Estate, Abeokuta… In view of her plea, the prosecution counsel Ben Ubi and Festus Ojo asked the court for a trial date while the defense counsel Bayo Adegbite moved a motion for the bail application for the defendant. Justice Majekodunmi granted her bail in the sum of N5m (Five million naira) and two sureties in like sum. One of them must be a land owner within the Jurisdiction and a grade level 12 officer. She must deposit her International passport with the court. The matter has been adjourned to 21st of December, 2016 for trial.

The journey to the dock began for Folashade following a petition submitted to the EFCC alleging that Folashade defrauded the petitioner under the guise that a four bedroom bungalow was available for sale and after making payment of N7,180,000.00(Seven Million, One Hundred and Eighty Thousand Naira) for the property, she was later informed that the owner was no longer interested in the sale of the property but only three million, five hundred and Thirty Thousand Naira (N3,530, 000. 00) was refunded. Hence, the petition.

Rotimi Amaechi Shows His Jovial Side, Plays With His Aide's Daughter In Abuja. Photos

Usain Bolt Parties With Different Women For The 4th Night In A Row…. Photos