One of the two-man robbery gang arrested by the operatives of Rapid Response Squad (RRS) of Lagos State Police Command for allegedly robbing a 76 year old lady in her apartment, has confessed that his ringleader, an herbalist, now at large, masterminded the crime. 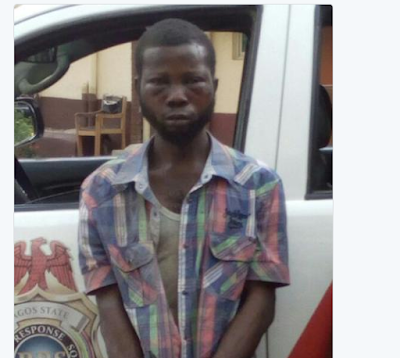 The suspect, Segun Taiwo, was apprehended after they had successfully dispossessed the 76 year old lady of her valuable at Oduduwa Street, Itire, Lagos. The duo had collected $10,000, £5,000, an N100,000 and a box containing assorted jewelry from their victim at about 8:00 p.m over the weekend. While confessing at the RRS’s Headquarters, Taiwo disclosed that he was only invited into the robbery by the herbalist, who promised to give him 50 percent from the loot. While explaining how they got clue before carrying out the operation, he explained, “the mastermind is an herbalist. He was treating one of the woman’s daughters (name withheld) who had sore in her right foot… Whenever the lady visited him for treatment, he was always stylishly collecting information about her mother from her…. Unknowingly to the lady, he had collected all necessary descriptions and information needed to perpetuate the robbery…. After a while, he told me that we have a special operation. He further told me that his patient (the woman’s daughter) must not be aware because we were going to their house to rob her mother.” The suspect also told investigator that, the herbalist knew exact time to strike the house, the description of the apartment, where the woman’s money and other valuables were kept following the information gotten from her daughter. According to him, “we carried out the robbery successfully. We gained entrance into the two-storey building and headed straight to the old woman’s flat…. From our preliminary investigation, we got to know that the first flat opposite the entrance gate was theirs. We went straight inside the flat without any stress…. We met the 76 year old woman while sitting on the prayer’s mat inside the living room. We dragged and threatened her with cutlass and axe to surrender all her belongings including foreign currencies with her or else we will waste her life.” The suspected robber explained that the old woman cooperated with them and handed over a bag filled with both Nigeria and foreign currencies. “We also forcefully collected her gold jewellery box…. However, on our way out, we overheard the voice of the old woman who was crying and shouting for help…. Unknowingly to us, RRS operatives who were patrolling the area have overheard her voice. As we were rushing out to escape from the house, the operatives sighted us and we took to our heels…. Immediately, the policemen made a hot chase which led to my arrest and my accomplice managed to escape with the local and foreign currencies while the jewelry box was retrieved from me,” the suspect revealed. The suspect also disclosed that they had before now, robbed one innocent man along Okota Road of his Two Hundred Thousand Naira (N200, 000.00). “My gang leader is a very powerful herbalist. He knows when you have money on you. The first day I followed him to rob was a day when we went to Okota Road. On getting there, he saw one man along Okota Road, and he pointed at the man and told me the man had money on him…. We moved closer to the man and he recited some incantations, and to my surprise, that man handed over his money, about Two Hundred Thousand Naira, to us. Out of that money, he gave me just Eleven Thousand Naira (N11, 000.00),” he added. While confirming the arrest, the State Police Public Relations Officer (PPRO), Superintendent of Police, SP Dolapo Badmus, said that the command is making effort to arrest the gang leader, added that Police will leave no stone unturned to nip crimes at bud in the state. The suspect has been transferred to Special Anti-Robbery Squad (SARS) for further investigation.

Bukola Saraki Hosts His Constituents To A Lavish Banquet In His Residence. Photos