Pope Francis and the Archbishop of Canterbury Justin Welby, were seen in an elated mood at the end of Vespers at the monastery church of San Gregorio al Celio in Rome, Italy, Oct. 5. The religious leaders have said that they are “undeterred” by the “serious obstacles” to full unity between Anglicans and Roman Catholics. 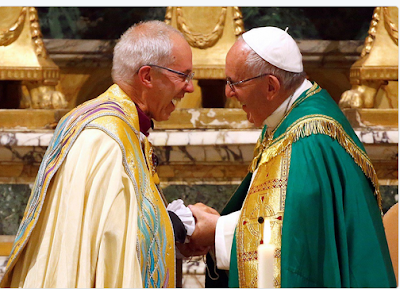 In a Common Declaration, issued in Rome Oct. 5, the two say that the differences “cannot prevent us from recognizing one another as brothers and sisters in Christ by reason of our common baptism. Nor should they ever hold us back from discovering and rejoicing in the deep Christian faith and holiness we find within each other’s traditions.” During the service, 19 pairs of Anglican and Roman Catholic bishops from across the world were commissioned by the pope and the archbishop before being “sent out” in mission together. 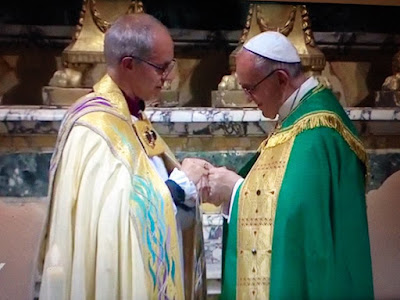 Photos; This Woman Has Stunned Online Users With Her 'Bikini'. See Why

Lady Follows Tottenham Stars To A Hotel Room In Barcelona. See Why. Photos