The police have arrested an eight-man gang of armed robbers said to be terrorising Abuja, Kogi and Kano states. Among them is Rekia Musa, a divorcee and Accounting graduate of the Kogi State University, who told the police that she had only been an informant for the gang for four months. 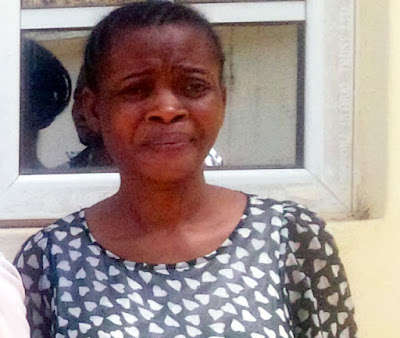 The police said the gang had links with a suspect, Zakeria Isiaka arrested recently by the Inspector-General of Police Response Team, along the Okene-Akure Expressway.  On November 5, Saturday Punch reported Isiaka’s claim that he could have become the Chief Security Officer of Kogi State if the late All Progressives Congress candidate in the governorship election in Kogi State, Abubakar Audu, had not die. Others arrested along with Musa are Ismaila Abdulmumuni, Abu-Amidu Disu, Tenimu Musa, Boniface David, Aliu Isah and Danjuma Cyprian. A police source told Saturday Punch that the suspects confessed to have carried out several robbery operations, including an April 2015 operation in Abuja where about N200m was stolen from some politicians. In her statement, Musa, popularly called Hajia, explained that about four months ago, one of her friends, Isha Mohammed, approached her and said he knew some politicians who had stolen public money and hidden them in their houses. She said, “He asked if I could help him to get a charm that would make it possible for him to disappear, called Etubi. He said if he could disappear into the politician’s house and steal the money unnoticed, he would give me a large cut of the money. “I then travelled to my village in Agba Local Government Area of Kogi State and met a boy called Tenimu. I told him about the plan and he promised that he could get the charm. “But instead, Tenimu told his friends about the money. The friends were armed robbers. They then came and tricked me into taking them to the politician’s house in Kano State.” According to Musa, when the gang got to the house in Kano, they were discouraged by the heavy presence of policemen and went back home. However, she said she became upset because the plan did not fall through. “I thought targetting politicians who have stolen government money was a good idea because I was broke. Few days later, Isah got another piece of information about an immigration officer based in Lagos, who had stolen government money. “I contacted my gang and we went to the man’s house and robbed him. But we didn’t get as much money as Isah told us the man had at home.” Police sources said the suspects came on the radar of security agents after robbing the immigration officer, a comptroller in the service. Musa, AKA Hajia, also allegedly went around town to scout for victims for the gang before her arrest. Twenty-five-year-old Mohammed, who brought the information about the immigration officer to the gang, explained that it was the only operation he ever went with the gang. The suspect, also a Kogi State indigene, explained the he was a fashion designer with a shop in Bwari area of Abuja. He said, “It was the bad friends I met in Abuja that led me into armed robbery. There was this customer, Ismaila, whom I made clothes for. He was the first person who told me about the money the politicians usually brought to his office at Mabuchi area of Abuja. “He said the politicians shared the money there and he said he could rob them. I then told him about one of my customers, Dan, who normally wore a charm around his waist. I told him he could take part in the robbery. “I also told another friend, Ismaila (Abdulmumuni). When I informed Dan about the money and the plan to rob the politicians, he said we should hold a meeting along the Duste Expressway in Abuja. He also brought some of his friends and Dan asked that we should go to the place. “After a while, Dan said we might need guns for the robbery and that the politicians might have some powerful charms.” Mohammed said on the day the politicians came again to share money at the location, the gang was immediately alerted by Abdulmumuni. The gang stormed the place and robbed the politicians of over N200m. Mohammed said, “After the operation, Dan called and gave me N4.5m, which he said I should share with Ismalia. But I later learnt that we actually got more than N200m from the robbery. Dan alone got N25m.”

Guy Blasts Lady For Wearing This Outfit To Church. See What Happened Next. Photos

How Four Men Killed A Trader And Removed His Heart For Ritual In Oyo. Photo