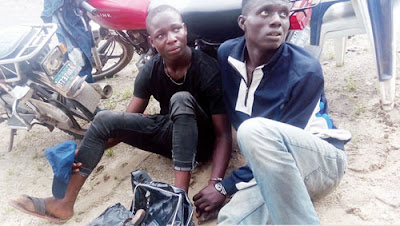 The suspects, Godspower Peter, 18 and Voke Samuel, 15, were nabbed with a double barrel cut-to-size gun and a fabricated single barrel gun with four rounds of cartridges. One of the suspects, Peter, said in a statement: “I am a motorcycle rider. The four boys asked me to carry them from Agbarho in Ughelli North to Otujeremi in Ughelli South and I charged them N1, 000. They agreed. “They appealed to me to tow their motorcycle, which was bad. On our way, we saw a police checkpoint. We were searched and two guns and bullets were found in the bags they carried. The boys fled into a nearby swamp.” The Assistant Commissioner of Police (ACP) in Ughelli Area Command, Mr. Usman Ndanbabo, said his men arrested the suspects on a motorcycle while carrying a black polythene bag, which contained cut-to-size guns, with one of the bullets already used, indicating that they were coming from a robbery. He said the four suspects jumped into a swamp and his men pursued them, but could only arrest two.

Ndanbabo, who said the suspects made statements, added that the command will not relent in its efforts to make the area crime-free.

2 Herbalists In Police-net For Stabbing Man And His Friend In Ogun State.

Guy Causes Commotion After Kneeling Down To Beg A Lady Publicly In Enugu.. Photos + Video