An accountant with a lubricant producing firm in Ikoyi, Lagos State, Femi Akinola, has been arrested by the police for allegedly stealing the company’s $50,000. It was learnt that the company – Eterna Plc – had sent 30-year-old Akinola to withdraw the sum from the United Bank for Africa in the Marina area on Thursday, November 17. 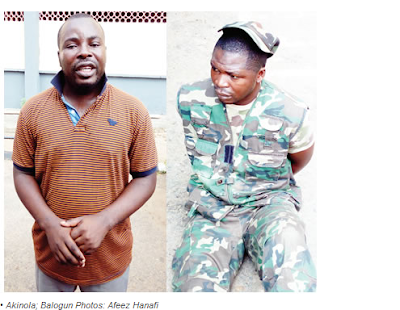 On getting back to the office, he reportedly told his boss that he was kidnapped on the way from the bank, saying his abductors dispossessed him of the money and his phones. Our correspondent gathered that Akinola was subsequently arrested by the police. Police investigation reportedly revealed that he faked his own kidnap. He was said to have led the operatives to the fence of a primary school in the Bariga area, where $30,000 concealed inside a concrete block was recovered. While parading the suspect on Friday at the Lagos State Command headquarters in Ikeja, the Commissioner of Police, Fatai Owoseni, said Akinola stripped himself and threw his phones into a river to perfect the ploy. He said, “The suspect worked with a multinational company in the state. He was sent to withdraw $50,000. After withdrawing the money, he faked his own kidnap and claimed that the kidnappers collected the money. “The police have been able to recover $30,000. He confessed to have given out $15,000. We are making efforts to recover the remaining sum.” However, Akinola, who hails from Ondo State, denied feigning his abduction, saying one Kingsley, who purportedly lives in United Kingdom, colluded with a fraudster to swindle him out of the money. The father of two children said Kingsley’s accomplice hypnotised him, adding that the man had left before it dawned on him that he had been defrauded. He said, “I am also into music. I used to chat with one Kingsley in the UK, who wanted to help me with my music career. I chatted with him that day and I told him that I just withdrew $50,000. He told me he needed $15,000. He sent somebody to meet me around Marina to collect the money. It was after the person collected the money and my phones and left that I came to my senses. “I was confused and didn’t know what to do. At that point, I decided to hide the remaining $35,000 at the back of a primary school in Bariga, and left for Epe to commit suicide. On getting there, I changed my mind and reported to the police that I was robbed.” The suspect stated that he was known for honesty, which had earned him awards from the company every year. “I earn over N120,000 per month. I didn’t have intention of using the money to promote my music career. That was not the first time I would withdraw money for the company as an accounting officer. I had withdrawn more than that in the past. I have been working with the company for five years,” he added. Meanwhile, an electrician, Abdullahi Balogun, was also paraded on Friday for impersonating a soldier to supervise the demolition of a house in Bariga on Thursday. He said he got the uniform from a military officer, identified simply as Mako, who promised to give him a token after the demolition.

The indigene of Kano said, “Mako directed me to the place. I was monitoring the demolition when policemen came and I was arrested. I have three children and a wife. I accepted to carry out the assignment to get some money to feed my family.”

Men Fight Each Other In The Street After One Grabbed The Other’s Girlfriend’s Breasts. Photos