Gambia is due to hold presidential elections on Thursday. Three candidates are in the running including current president, Yahya Jammeh. He’s seeking a fifth term in office. Although Jammeh is widely expected to win, there’s an unprecedented surge in support for the opposition. 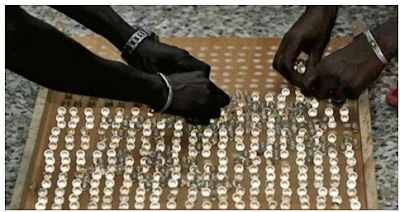 As it has been done for six decades, voting will take place with marbles. Voters enter a private area that is curtained off where they drop a marble into one of the three drums that are painted with the party colours and emblems, and a bell rings confirming a vote has been cast.

“It’s unique and we are very proud of it,” said IEC vice-president Malleh Sallah, explaining how the Gambian Public Works department dreamt up the idea six decades ago.

Men Allegedly Arrested For Stealing From Passengers Aboard A Flight To Lagos. Photo