A hairdresser has asked an Agboyi Ketu Customary Court in Lagos State to put an end to her 15-year-old marriage, citing battery and maltreatment. Mrs Abosede Chijioke told the court that her husband maltreats her because she bore him three female children. 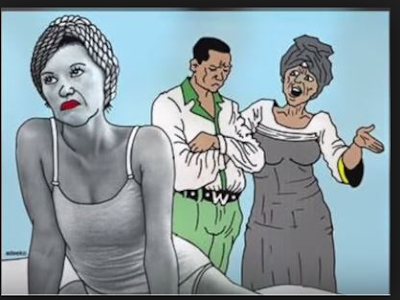 “We loved each other when we got married. Things took a turn for worse when I put to bed almost fourteen years ago and gave birth to a girl. “ My husband didn’t change outrightly. But he started maltreating me when his mother moved in and told me that my child was a bastard because she insisted that in their family, they give birth to male children first. “My mother-in-law tagged me because we are not from the same tribe. She would tell her son that I insulted her in Yoruba when I knew fully well that she does not speak the language. My husband started beating me even when I had just given birth. He would starve me and the child. He refused to buy pampers and other things for the baby. “He improved when his mother went back to the village after six months. I got pregnant again and yet again gave birth to a female child. My husband hit the roof and started calling me useless. He would come to my shop and yell insults at me. He wouldn’t provide for the children. He would only sleep with me whenever he was drunk and leave me with bruises all over. “I endured all these because of my children. His family did not even help matters as they took sides with their son. My mother-in- law is a very bad woman. She even brought another woman into our house trying to displace me,” she said. She asked the court to end her marriage and grant her custody of her children, while also urging the court to mandate him to provide for the needs of the children. “My husband is a successful businessman. He can take care of the children’s needs. That is all I want from him as he said categorically that he doesn’t love me anymore. I want to move on with my life and put the past fifteen years behind me,” she said. Her husband Austin was, however, not present in court to deny the allegations.

The matter was adjourned till January 17 for continuation of trial.

Five Friends Who Drowned While Swimming Laid To Rest Amid Tears. Photos

Scorned Women Vent Their Anger On Alleged “Husband Snatcher” In The Streets Of China. Photos

Lagos Pastor Accused Of Sleeping With Church Members, Escapes Through The Fence… Pics