Gov. Ibrahim Gaidam of Yobe State on Thursday directed a sleeping commissioner at the presentation of the 2017 budget to the State House of Assembly to go home for more sleep. The News Agency of Nigeria (NAN) reports that the governor had barely commenced reading the budget speech when the cabinet member started snoring. 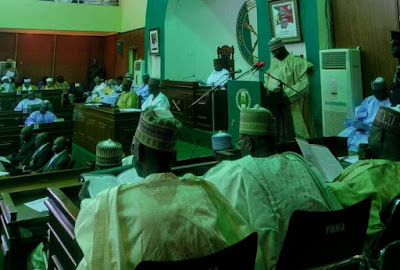 Mr. Gaidam warned that any public officer henceforth caught sleeping stood sacked. “As from today, any commissioner or special adviser caught sleeping stands sacked and will immediately be replaced. “We will borrow a leaf from the North Korea experience to make government affairs a serious business,” he said. Mr. Gaidam while reviewing the budget performance of the outgoing year paused and directed the sleeping commissioner to go home. “I am referring to the commissioner who is sleeping, you can go back home to sleep since you cannot endure the session,” he said. Although the governor did not mention the name of the sleeping commissioner, he pointed to the row of the commissioners to issue the directive. NAN reports that the bewildered commissioners looked at each other in embarrassment and sat up to avoid dozing and being victims of the governor’s sledge hammer.

Adamu Dala-Dogo, speaker of the assembly, however, advised public officers to take beverages that would keep them awake during public functions. (NAN)

See The Interior Of The World's Most Luxurious Commercial Plane. Photos