Dangote’s Worth Drops By 32%Nigerian born Africa’s richest man, Mr Aliko Dangote, has lost 32% of his wealth. Bloomberg reports that the president of the Dangote Group, lost 4.9 billion dollars in June, representing one-third of his wealth. 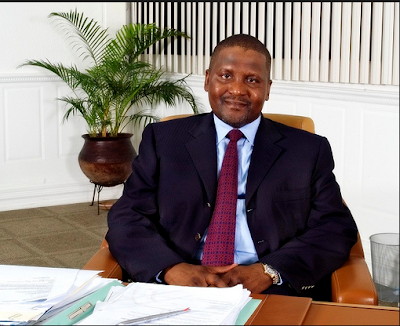 The decline resulted from the effect of falling oil prices and the devaluation of the naira, dragging the magnate’s ranking to 112 on world’s billionaires’ list. With a total value of 10.4 billion dollars, Mr Dangote was the world’s 46th-richest person as at June 2016. Aliko Dangote was also recently named as the second most powerful person on the African continent. In the latest edition of its 74 world most powerful people, Forbes Magazine named billionaire Dangote along with 70 others including Russian President, Vladimir Putin; US President-Elect, Donald Trump; and German Chancellor, Angela Merkel. Mr Dangote is listed as number 71 ahead of Trump, and the 68th most powerful in the world for this year. The business mogul has constantly featured on the list since 2013 when he was listed as the only black African among 100 most powerful persons on the planet.

As of 2013, Dangote was the only African listed among the most powerful people in the world before the Egyptian president, Abdel El-Sisi recently featured on the list.

See Photos Of The World's Oldest Surgeon Who Is Still Active At The Age Of 89…..