The #BringBackOurGirls group has outlined a set of conditions to be met by the Nigerian government before accepting its invitation for a trip into Sambisa forest. The government had asked Oby Ezekwesili, the convener of the advocacy group, to nominate three of their members to join the military on a guided trip into Sambisa forest in search of the missing Chibok girls. 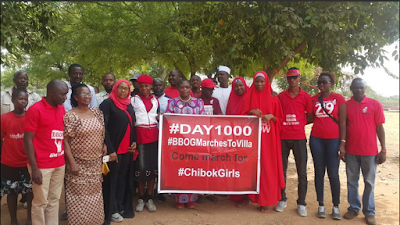 In a letter dated January 11th and signed by Information Minister, Lai Mohammed, the government said the trip would avail the BBOG group the opportunity to witness and better understand the efforts being made to secure the freedom of the abducted girls. The letter said the trip, planned by the military, would see invited BBOG members and a select group of journalists joining the ministers of defence and information, the Chief of Air Staff and Chief of Army Staff for the tour. “They will first go to the Nigerian Air Force (NAF) Command Centre in Yola to witness firsthand the efforts being made to search for the girls by NAF and then join the day and night sorties with the BAF to the Sambisa Forest,” the letter said. Responding to the invitation, the BBOG group said its members unanimously agreed that they were open to exploring the opportunity. “We had an emergency meeting of our Movement to discuss your invitation to embark on a ‘guided tour’ of the Nigerian Air Force Command (Yola) and Sambisa Forest with officials of the government,” the group stated in their letter dated January 13th and signed by Mrs. Ezekwesili. “However, before proceeding with further discussion on the proposed visit, we propose a pre-tour meeting to discuss pertinent issues that will help inform our decision to proceed. “We believe that this prior meeting would help provide first-hand knowledge of, and answers to questions that our movement wishes to raise ahead of the guided visit.” The group proposed that participants at the meeting include the National Security Adviser, the Minister of Defence, the Chief of Army Staff, and the Chief of Air Force. The group accused the Chief of Army Staff, Tukur Buratai, of endorsing a statement by “a certain group” visiting him which described the BBOG movement as engaging in “social media terrorism”. “It is puzzling that the reported said visit happened less than 48 hours before our Movement received your letter asking us to travel in the company of the same Chief of Army Staff to Sambisa Forest,” the group stated. “We demand therefore that ahead of the pre-tour meeting we have proposed herein, that the Chief of Army Staff retracts and apologizes for endorsing such slanderous attacks against our Movement #BringBackOurGirls and specifically at some of our leaders. “Such a step would communicate that it is with goodwill that the Federal Government is asking us to entertain the visit proposed in your letter.” More than 200 girls were abducted from Government Secondary School, Chibok, in April 2014 by Boko Haram insurgents.

For nearly three years, the BBOG group has sustained itd advocacy for the safe return of the girls to their families.

Japanese Billionaire Arrives Dream Team's Base In Order To Fulfill His Pledge.Photos

Woman Burst Into Church Half-naked Claiming She Had Been Raped By 3 Black Guys.