Two bell helicopters recently seized by the Nigerian Customs Service have been handed over to Nigerian Air Force in Lagos. Speaking after the handing over ceremony, the Deputy Comptroller General of Customs, Dan Ugo, alleged that the importers of the helicopters failed to comply with the necessary import requirement. 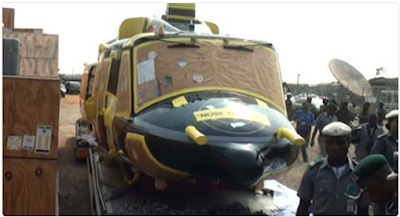 “Due to the vigilance of the officers and their controller here, it was observed, when the requisite documents were requested for, that they breached our laws. “This kind of equipment should come with end user certificate and some other things and the law provides that if you import in breach of the law, we make a seizure of the items. “After seizing, it is not enough. we must go the whole hog. The process is that we go and appear before the court of law, file for condemnation and the court actually condemned it and forfeited it to the Federal Government of Nigeria,” he told reporters.

On his part, the representative of the Air Force, Air Commodore Hyacinth Eze, explained that the aircraft would assist in the drive to end all forms of insurgency in the north-eastern part of Nigeria.

Meet The Young Boy Who Crawls To School After Losing His Legs In A Car Accident.. Photos

Couple Who Were Prohibited From Marrying Finally Tie The Knot 65 Years Later. Photos