Rivers State Governor, Nyesom Ezenwo Wike has called on the Nigerian Police to inform the world how and where the Deputy Superintendent of Police (DSP) was murdered during the rerun legislative elections, instead of trying to cover obvious facts. The governor also wondered why the police have refused to make public the communication that an APC chieftain and Former Commissioner of Power, Mr Augustine Kachi Nwokocha had with the killers before the DSP was brutally murdered. 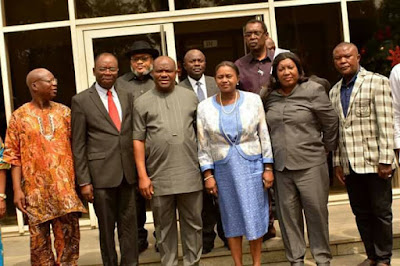 Governor Wike spoke on Thursday when he granted audience to the management of Independent Newspapers Limited at the Government House, Port Harcourt. He said: “The police should let the world know where the DSP was killed? What is the polling unit where he was killed? The former commissioner of power who was mentioned by the killers, has he been questioned? “Where is the call log of that former commissioner as communicated with the killers? Have they checked the discussions between the Commissioner and the arrested killers? “They know the truth, but they want to cover a lot of things. The Army announced that they recovered the uniforms from the forest, was there a polling unit in the forest?”. He noted that the steps being taken to blackmail the state government will fail because the Rivers people cannot be cowed. He appealed to journalists to always defend the truth and speak out regularly.

He said: “The survival of democracy to a large extent depends on a vibrant media. Certain things happening in the country must be made public by the media “.

Assessment Team Embarks On Sympathy Visit To The Site Of Explosion In Anambra State. Photos