A rice farmer at Ezinator- Ohofia, Oduma in Aninri Local Government Area of Enugu State, Mr Simon Chukwu, has relived his ugly experiences in the hands of Fulani herdsmen during the last Christmas season, explaining that he escaped death through the skin of the teeth. Chukwu said he was harvesting rice in his farm when some herdsmen came around with their cattle to eat up the grains on December 22, last year, adding that his attempts to resist the herdsmen led to his being inflicted with several machete cuts on both sides of his head and the left hand. 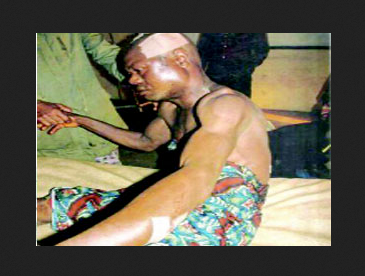 Chukwu, a National Certificate in Education, NCE, holder who went into farming because there was no teaching jobs available, told the South East Voice that, “three groups of herdsmen who were bent on killing me in my farm while I was working alone came around 5 pm in the evening of the fateful day. They scattered their cows all over the rice farm, eating every available grain in the farm.

“However, the trouble began when I shouted, saying, Aboki, please take your cows away. Three of the herdsmen came from different directions and surrounded me, questioning why I should ask them to take away their cows. They were holding cigarettes and some cans of adhesives (solutions) which they were sniffing to make them high. Then one of them who was later identified as Alhaji Tobi said, if we kill you now, we will drive away all your people in the community. “At this juncture, I tried to run but one of them hit me with one of the long sticks they were carrying and I fell down.


Then, the slim and light-skinned one and the third who was black and of average height gathered around me and started cutting me with their machetes on the two sides of my ears. Harvested rice “When I tried to defend myself with my bare hands, they gave me a deep cut on my left hand which broke one of the bones and blood started gushing from the wound very profusely.

When they saw that I was almost lifeless, they left me and escaped with their cows. It was when I shouted for help with the last breathe in me that a man appeared and came to my rescue. Through God’s mercy, two commercial motorcycle operators (Okada) who rushed me to the hospital also appeared at the scene. That was how I survived and this was around between 6pm and 7pm.

“At this point, the Police Officer in charge of Negba Police Post came to the scene and took up the matter as if I were his own son. He began to call everybody that mattered on phone and this was how the matter did not degenerate to a conflict between my people and the Fulani herdsmen at Aninri. But the next day, the herdsmen went back to my farm and set it on fire.

They also, set the adjoining cassava farm which I borrowed N400,000 to cultivate while I was still in hospital. I borrowed over N1 million to cultivate rice this year. I borrowed some of the money through the FADAMA programme. “They also burnt over 150 basins of already harvested rice and by the current price of N5,000 per basin the harvested rice is worth about N750,000. I incurred a total loss of over N2 million.

The government has been asking us to go to the farm but each year after suffering, herdsmen would appear from nowhere and destroy our farms with their cattle and these things happen at harvest periods. How can we survive as a country when some people are seen to be above the law?”

I’m A Negotiator, Not A Kidnapper – Teacher Arrested By Police In Kogi. Photo